Ocean Spire is an location in Tyranny.

Once inside Blade Grave Oldwalls defeat the bane and use the torchkey on the Beacon to reveal a switch on the wall. Hit the switch to open the door and head inside. Defeat the bane and interact with the rune on the far wall then head right. Watch out for the trap and head speak with Lantry about the glowing orb in the center of the room. Once finished, pick up the keystone and use it on the corresponding plate. Afterwards use the Beacon at the north end of the area to activate the bridges (you must have the torchkeys from Twin Rivers Oldwalls to do this) and then head to the entrance where you came in and hit the switch there, lowering some stairs just outside this room.

Head up the left set of stairs and into the room on the left. Across the bridge is a stone needed for the main room. Take it and defeat the Bane. Place a nearby stone into the the holder and then defeat the next wave of bane and head back out of the room. Head up the hall, being mindful of the traps on the left wall. Defeat the Bane at the end of the hall and head across the bridge to the right. Defeat the bane, disarm the trap and loot the chest to find a Sigil of Passion. Head further right, across the next brige, and use the your torchkeys on the Beacon. Switch will appear and it will lower the door to the south.

Defeat the Bane inside and loot the corpe to learn the ?? recipe. Study the rune on the wall to acquire the Sigil of Stunning and loot the brazier for a nice chest armor. Head out of the room and to the right and down. Defeat the Bane here and disarm the trap. Hit the switch on the wall to lower a door on the left side. Defeat the Bane in this room and loot the (hidden) gem on the wall. Use the Garn torchkey to reveal a switch near the door that opens the room next door. Disarm the trap and loot the container to reveal the Cold Keystone. Use the Keystone on the matching plate in the main room and then head back up the stairs on the left and up the stairs at the end of the hall that take you to Blade Grave Oldwalls - West.

Once inside defeat the Bane and loot the corpse to gain more evidence against Graven Ashe. Defeat the Bane in the next room and loot the containers to find the Saphire torchkey and a mysterious metal that can be upgraded at a Spire Forge. Head into the next room and use your torchkeys on the Beacon there to reveal a switch that lowers the stairs. Send one party memeber into the hall way below, before going up the stairs, and the rest back to the previous room. Have the single party member flip the switch to lower the other door and send in the 3 others and defeat the Bane there. Loot the Stone of Elucidation from the container and learn the Sigil of Endless Time III from the wall.

Next head out of the room and to the right. Defeat the Bane and use your torchkeys to lower these stairs (make sure it is on red before you head up the stairs). Head left and loot the Heavy Keystone from the chest and defeat the Bane. Then head right and loot the loose flooring and inspect the rune to add to your Ocean Spire rubbing. Don't forget to loot the (hidden) gems nearby. Flip the switch on the wall and then head back down the stairs and across the bridge and flip the switch on the other side to lower the door to the south. Head through the exit at the north into Blade Grave Oldwalls - East.

Now head back into the main room and fight the Bane, being careful to disarm the trap first. Loot the containers behind them and then flip the switch on the floor to extend the bridge. Head across and head down the hall on the left (there's 2 traps on the right). Past the traps head into the room on the right and solve the Beacon puzzle (the order is blue, red, orange). This will open a door on your left, head through and disarms the traps, looting the plans for Skorn in the chest. Head on a little further around the corner into another room that contains a artifact Gravebow. The inspect the rune to discover the Sigil of Spellsurge. The Bright Keystone should also be here, so you should have all of them now. You can head to the Runic Hall by heading the northwest section of the map. The last piece of that design is located in that room and then you will unlock Ocean Spire. 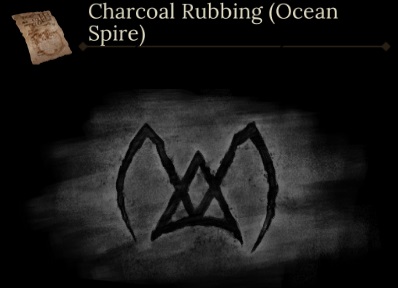 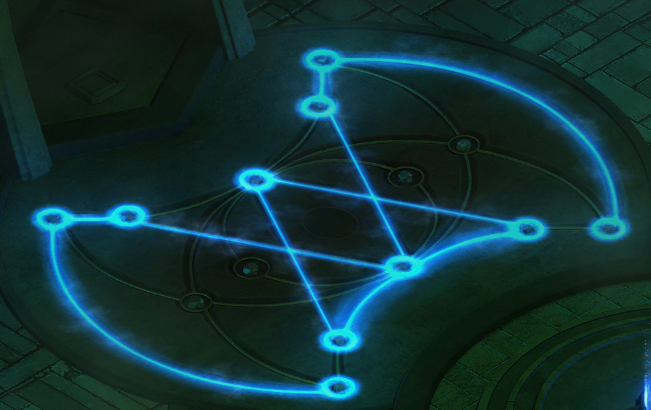 (Active one mark then the next to draw a line)

After you claim this Spire and gathered all the keystones, back to the soul trap and active the keystones in clockwise sequence. The barrier is then down and you need to defeat the enemy to get that artifact.