Scarlet Chorus Camp is an location in Tyranny. 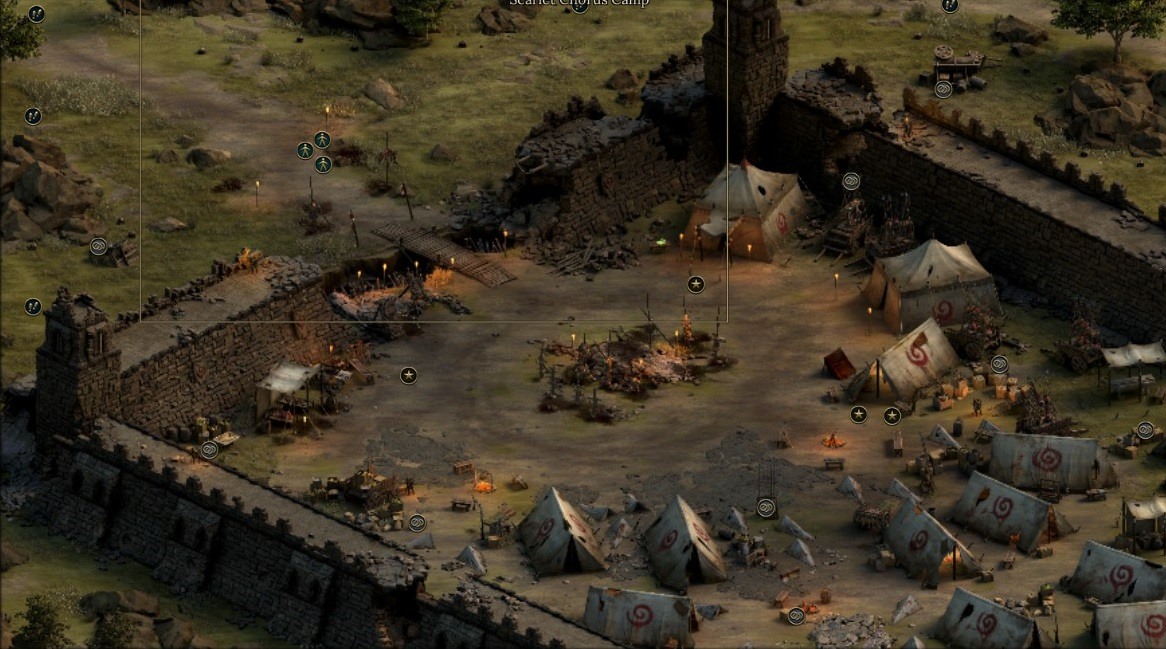 As you first approach the camp you will see Quiet Shiv and Shivershank trading insults. You have several options here. You can bet on the fight, which will have a random outcome no matter who you gamble on. You can stop them and gain wrath with the Scarlet Chorus, but favor with Tunin. You can use pass the 37 Athletics check and kill Shivershank, netting you 89 XP but losing favor with the Scarlet Chorus. Or you can pick a side and join in the fight, gaining favor and killing one of them. Afterwards, speak with the guards and head into the encampment.

If you have Favor 1 with the Scarlet Chorus, speak with Death Knell and she will unlock the area Remote Settlement as well as give you a quest called The Way of the Horde. Speak with Salveros to gain some wrath or favor with the Disfavored. Afterwards, head over to the right to speak with Baz and Regg if you'd like some training or head up to the top of the camp if you'd like to purchase some equipment from Sniggler Dagos.

Next speak with Fifth Eye  to advance the Taking the Outer Valley quest. Afterwards you will need to interrogate Variah Kel. You can use Athletics (20) or Subterfuge (30) to get information from her. You will gain wrath with the Scarlet Chorus if you spare her, but you can regain favor if you make her kill her comrades. If you instead choose to release her as a supposed spy for the Scarlet Chorus, you will additionally gain wrath with the Vendrien Guard.

Afterwards you will need to speak with Lantry and decide what to do with him. He will become a Companion if he lives, so this is advised. There are a few possible options to choose from to have a trial by combat, with two options gated behind a Lore and an Athletics check, though this is not advised, as you would gain additional wrath with the Scarlet Chorus. If you represent him in combat you will gain loyalty from Verse and gain favor with the Scarlet Chorus. After you defeat your opponents he will join your party and you will unlock Tripnettle Wilderness. Otherwise, if you choose to leave him for dead, the Archon of Secrets will consume him, leaving you without a companion but still with the information to proceed onto Tripnettle Wilderness.

Before you leave, if you have 32 Lore, which you should now have with Lantry in the party, read the scroll near where Fifth Eye was standing earlier to get the Sigil of Illusion.

Next speak with Sirin. If you allowed her followers to go to the front lines during Conquest you will gain favor with her. She will attempt to get you to remove her helmet, and you will receive a Lore (41) check, which if you pass will grant you some xp. No matter what you say to her here she will be displeased with you and will end the converstaion. You can gain some favor with Lantry if you tell him you know the Sirin, however.

Once finished, leave the Scarlet Chorus Camp and head for Vendrien's Well Citadel.