Finding a Madman is a Quest in Tyranny.

Behind Ferris is a (hidden) Accessory that gives +15% graze deflection. Past it is a glowing yellow switch on the floor, use it to open the door. Inside you will find crafting materials and (hidden) gems. Then head back into the room with the switch and use the torch key on the Beacon. This will allow you activate the other switch on the floor, lowering the other door.

In the next room you will find some containers to loot and a Beacon that doesn't respond to the torch key.  Up the stairs, however, IS a rune you can use the torch key with. Doing so will allow you to use the switches on the ground. Hit the switch closest to the Beacon and head across the bridge. Be sure to look out for the trap on the other side. Use the key on the Beacon here and defeat the Bane. Head through the now open door and pick the Subterfuge (42) chest to find a nice pair of gauntlets. Then head back across the bridge towards the other switch you haven't used yet.

Hit the switch and head across the bridge, and then repeat this for the next switch. Head down the corridor and head into the Twin Rivers Oldwalls - Depths. Once inside you will see a Beacon where you can use either torchkey. You should have Citren torchkey and Amith  torchkey at this point. If you use Citren, the door on the left-hand side will open and will reveal with another Beacon, a container and a trap on the floor. The container can be opened with Subterfuge (44) and contains some health potions and camping supplies. There is a rune on the far wall that requires Lantry to be in your party and for him to have the Voice of Ages talent to be able to decipher (Sigil of Cyclical Energies III). Interacting with the Beacon does nothing at this point.

Head back into the previous Beacon and use the Amith torchkey (purple) and then use the glowing yellow floor switch again to open a small door to the southwest. You will immediately see some Bronze Brotherhood soldiers fighitng Bane in the next room. Help them defeat the Bane and then loot the Subterfuge (49) chest for gems. You will be attacked by some more Bane and then besure to loot the corpse to get part of a note needed to open the last room. Using the Citren torchkey in this room will reveal a switch in the hall. Using the Amith torchkey will reveal a switch even further on so you might as well do it now. Hitting the switch in the hall will lower the door at the end of the hall (watch out for the trap after the switch). Head through the door and watch out for another trap.

Ahead is a room and a bridge. The room is closed by the switch at the end of the hall. Hit it to open it. In the room is a (hidden) container with some crafting supplies and Apprentice Garrick. There is a Lore (44) check that will gain you some experience. You can attack him and gain average Wrath with the Forge-Bound or you can look the other way, but investigating will give you evidence against the Voices of Nerat (A Trial of Archons quest). Once done speaking with him, head across the bridge.

Loot the corpse and defeat the Bane here. Inspect the rune at the top right to complete the rubbing needed to enter the Sunset Spire. Using the Rho torchkey (red) will cause some Bane to come from the walls and reveal a yellow switch on the floor. Use it to open a nearby door. Watchout for the trap in the next room and loot the corpse. You will find a disguise that you can use to help Apprentice Garrick escape and another piece of parchment depicting the position of the torchkeys. If you give the disguise to Garrick you will gain minor Favor with the Forge-Bound.

Head through the door past the corpse and use the keys in the order described on the parchment. Citren on the upper left, Rho in the middle and Amith in the upper right. This will open a door to your left. If you do them incorrectly you will have to fight some Bane. If you'd like to gain some extra xp, this is a good way to gain some. In the next room you will find a Sigil fragment on a corpse and a Magic Sigil locked in the cabinet next to it that you can research if you have a Spire Library. There are 2 rooms in this area you can unlock by ?? to find ?? otherwise proceed to Lethian's Crossing Oldwalls - Antechamber.

Once inside loot the corpse confront Raetomonnon. There are a few checks you can pass here and if you pass the Lore check you will get another Sigil Fragment. Defeat him in combat and then decide his fate. You will gain Favor and Wrath with the Bronze Brotherhood no matter what you choose. He will give you the Magebane Helm which is your first Artifact. Next you will need to defeat Havoc and you will have to use the torchkeys to unlock him. The order is bottom left is green, top left is red, top right is purple, bottom right yellow. Havoc will attack when any 3 have been lit. The strategy with Havoc is to burn him and ignore the Bane that get summoned as he heals through out the fight and you'll eventually just get overwhelmed.

After defeating Havoc head up the stairs to the right and pick the chest with Subterfuge (49) to reveal Tempest and either kill or untie Zdenya. If you untied her speak with her you will gain Favor with the Scarlet Chorus and Forge-Bound. You will gain major Wrath from the Forge-Bound later if you send her to meet with the Voices of Nerat and she will die. Head back into the Twin Rivers Oddwalls - Depths and use the green torchkey to open the door you could not open before. Loot the gems and crafting material inside and study the rune on the wall to acquire the Sigil of Chaotic Decent. Once done with all that, head back to the Lethian's Crossing Runic Hall and put in the symbol below to access Sunset Spire. 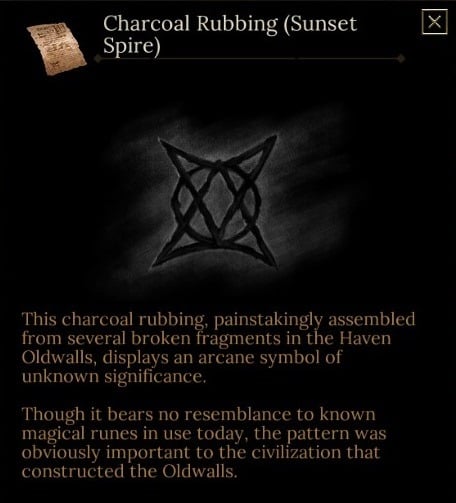 Speak with Eldian in Lethian's Crossing. Decide what to do with the Magebane Helm.