Lethian's Crossing is an location in Tyranny.

Built in the shadow of an Oldwalls junction in the realm of Haven, Lethian's Crossing is a growing trading settlement. The nearby rivers are rich in iron ore, though the locals lack the technology to smelt and forge the element.

In the years following Kyro's conquest of the Tiers, the population of Lethian's Crossing swelled with refugees fleeing the destruction of their homelands. The presence of the Forge-Bound mining the iron, along with their guards, makes this makeshift settlement a vital resource for Kyro's armies. 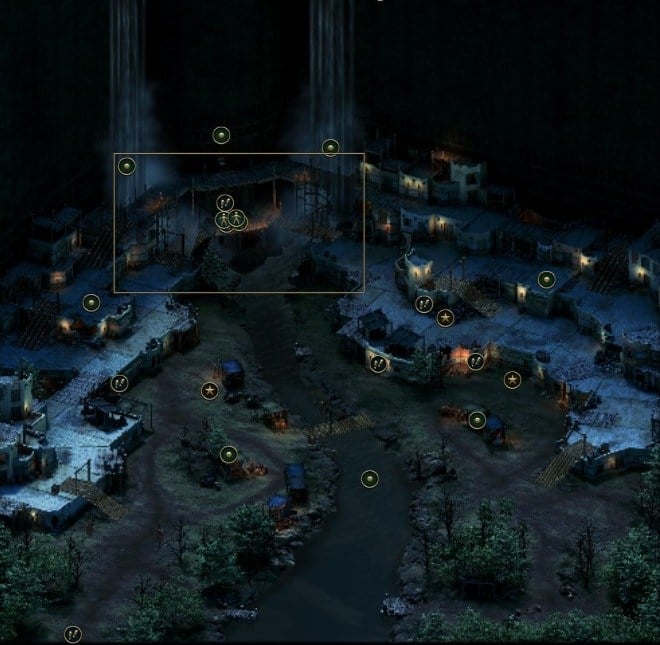 You will not be able to access this area until you have spoken with Raetomonnon in Ironhaul Trail. Once you arrive you'll notice there are tons of markers on the map and a couple merchants up ahead. Speak with them to gain some information, then head right and loot the (37) Subterfuge chest to acquire a Sigil of Rooting. Then head north and speak with visit the Merchants there and Harchiand Bronze. If you sided with the Scarlet Chorus, he will tell you about the seal and let you know the Fifth Eye gave the weapons to the Vendrien Guard. Then speak to Rip Throat, Droop Eye and Gravin for an interesting dispute.

There is a Lore (24) check that will net you some free xp if you pass. If you decide that none shall use the entertainer, you will gain favor with Tunin. Otherwise nothing will occur. Once finished head into The Sword or Sheath. Speak to Baylen Turr if you would like to purchase some food or drink, otherwise loot the crate in the far corner and pay for some company if you are into that sort of thing. When finished head back out.

Be sure to open the Subterfuge (47) chest next to Tharek for an Invisibility Potion. Then head south and loot the crates and chests. One contains a Broken Hilt which will prompt you to take it to a Spire blacksmith for further investigation. Then head back north and into the house next to Tier Smasher and

Head out and left and head into the building next door, Sirin's Sanctuary. Sirin is located at the back and you can gain Loyalty or Fear with her depending on what you say. You can also recruit her at this point. After recruiting Sirin, head back out and down and to the right. You are going to head up the ramp here that leads on to the roof tops. There are some containers here to loot, including a hidden one on the right hand side. Speak with Xenia, Wenhaver and Half Scar and make a decision about what should be done.

Once finished speak with Biotus and Svansen. You will gain Favor or Wrath depending on what you did with the Forge-Bound in Conquest. Biotus has some nice items for sale, including a new Accent Sigil. Afterwards, head into the house on the right and speak with Phaedra and Deya. Be sure to loot the chest and get some nice boots and then head back out and up the next ramp nearby.

Loot the containers around the area and head into the house. The dresser contains a Superior Great Bow, that would be great for Verse. Feel free to leave once you are done looting. Head up the next ramp and and loot all the containers and keep heading left. Keep going, while looting, and go down one level and enter the house just above the brothel you visited when you first got her. Kallion and Kalea are inside. Loot the place and head back out.

Open the Subterfuge (40) locked chest just above and head right, skipping the nearby door. The door you are skipping leads to Lethian's Crossing Oldwalls and we haven't done everything here yet. Keep heading right and into the next house. There are some items here, including a hidden Accessory on the left. After leaving head over to the right and into the door next to Biotus. Inside is The Forge.

Speak with Zdenya. Once finished speak with Eldian. If you inquire about the Spire the Stirring Visions quest will be updated. You can also get some free xp by asking him about the Scarlet Chorus and passing a Lore (48) check or (Athletics (48) check. Loot the Subterfuge (25) and (40) locked cabinets on the left to gain the Headhunter plans and a nice hammer. Speak with Lohara and inquire about her making you something. If you pass the Subterfuge (38) check you will gain minor Favor with the Forge-Bound. If you offer to pay you will gain minor Wrath. Afterwards, speak with Ulantis.

Head up to the third floor and left near the waterfall and witness the placing of the Helm. You can gain a good amount of Favor with Lethian's Crossing, if you agree to go into the Oldwalls and check if it is working. Head down and go into Lethian's Crossing Oldwalls.

After defeating the Bane inside and leaving the Oldwalls, a Blood Hound will approach you and let you know that the Lethian's Crossing is under attack. You will have to decide to maintain your alliance with the Scarlet Chorus or betray both factions and attack both. If you maintain your alliance with the Scarlet Chorus you will gain the quest Blood and Bronze. If you betray them you will get the quest Assault on the Crossing. Needless to say you will gain Wrath with them if you do this.

If you chose Blood and Bronze you will need to defeat all the Bronze Brotherhood enemies and their commander in Lethian's Crossing. There are about 10 enemies to kill. Speak with Tier Smasher afterwards. Once finished Raetomonnon will appear and taunt you before running off. If you have Athletics (47) you can hit him with a rock before he is able to escape. Persue his soldiers to the south and defeat them. Then return to the home Tier Smasher went into and speak with him. Once you've finished speak with Harchiand Bronze and complete Blood and Bronze to unlock the location: Deserter's March and gain the quest On the Hunt.

Lastly, speak with Kallion near the entrance to the Oldwalls and he will ask you to help find his sister Kalea and give you the quest Blind Ambition. He says she has gone to Deserter's March with the Bronze Brotherhood.

Assault on the Crossing (Neutral Path)

After defeating the Bane inside and leaving the Oldwalls, a Blood Hound will approach you and let you know that the Lethian's Crossing is under attack. You will have to decide to maintain your alliance with the Scarlet Chorus or betray both factions and attack both. If you maintain your alliance with the Scarlet Chorus you will gain the quest Blood and Bronze. If you betray them you will get the quest Assault on the Crossing. Needless to say you will gain Wrath with them if you do this.

After defeating the Bane inside and leaving the Oldwalls, the Bronze Brotherhood attacked the Lethian's Crossing and take Zdenya as hostage. You need to defeat all Brotherhood gang members then speak with Eldian to find out where Raetommon eascaped to, and get the quest The Bronze Thief. Before you leave this area for twin rivers, speak with Lohara at the forge to get quest Leave No One Behind and The Missing Shipment. Speak with Deya to get quest A Widow's Revenge. Speak with Gino to get the quest A Person Of Interest.